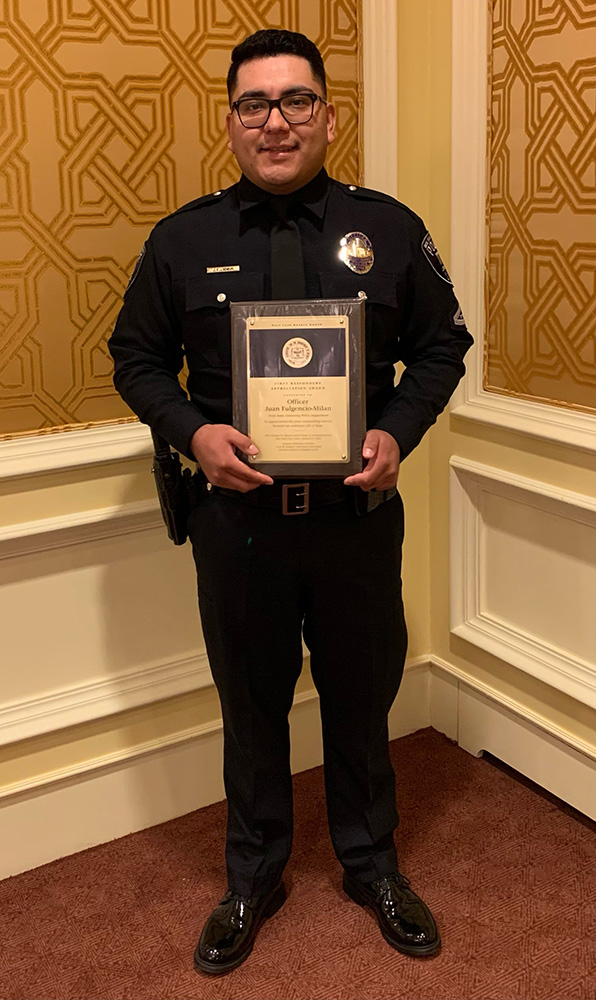 Dixie State University Police Officer Juan Fulgencio-Milan has been awarded the First Responder Award by the Utah NAACP for his outstanding community service both on the DSU campus and in the surrounding St. George community.

“Officer Juan, as he is known around campus, utilizes valued Latinx heritage and unique and personal experiences to continually encourage and motivate many students on campus, guiding them toward success, including a large percentage of first-generation and minority students of which many look to him as an example and role model,” said Dixie State Police Chief Blair Barfuss, who nominated Fulgencio-Milan for the award.

Fulgencio-Milan came to Dixie State University as a first-generation college student and English-as-a-second-language student, earning a bachelor’s degree in Criminal Justice Administration.  He then sponsored himself through the Utah Peace Officer Standards and Training Academy, becoming a certified police officer in April 2018.

“There isn’t a task or service opportunity Officer Juan will not do for our Dixie State University community,” Barfuss said. “Officer Juan epitomizes exemplary community-oriented policing and service, and is an invaluable member of our university.”

Fulgencio-Milan has been serving the Dixie State University campus for the past three years and was recently promoted to Police Officer II. In addition to his full-time public safety duties, he has returned as a student, working to obtain a second bachelor’s degree in Sports Management. He also serves as DSU Public Safety’s special events coordinator and can be found at nearly every on-campus event engaging with the community, students and staff.