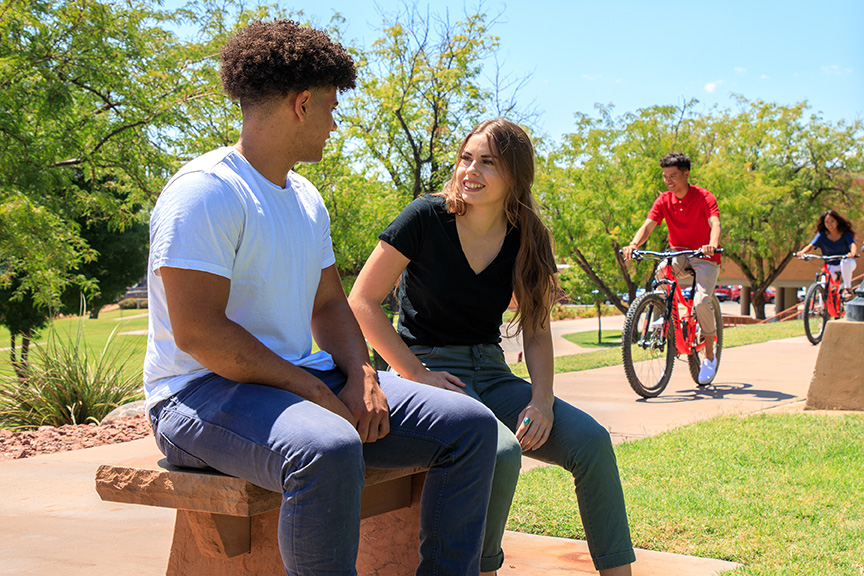 Dixie State University was one of the 38 institutions nationwide to be recognized as a bicycle-friendly university by The League of American Bicyclists.

DSU was named to the honorable mentions list of Bicycle Friendly Universities. This honor is awarded to institutions that create a healthy community in which students can safely get around campus by bike. The application process helps universities learn how to better build and maintain a campus environment that welcomes students who bike.

“The application process was a good experience and has spurred events and positive partnerships with DSU’s Sustainability Club, the Southern Utah Bicycle Alliance, the City of St. George and others,” Josh Thayn, Dixie State’s executive director of event services and risk management, said.

When evaluating an institution, The league considers initiatives such as connected bike paths, storage options, bike maintenance, and how a university prioritizes the health of its students and staff. Similar to The League of American Bicyclists, DSU puts a heavy emphasis on the well-being of its students, with its “active learning. active life.” approach to education.

For example, the university is partnering with the City of St. George, the Southern Utah Bicycle Alliance and Spin to create a pop-up bike lane down University Avenue. The initiative will kick off with a program at noon on March 16 on the Dixie State University campus in the parking lot off of University Avenue and 300 South. The event will feature bikes for the community to ride, pizza, music and giveaways. The bike lane will be available to test March 16 and 17.

Click here to learn more about this award and The League of American Bicyclists.